Now that the excitement of the spring and early summer flowers has passed and farmers are well on the way to harvesting their cereal crops, August has a mature feel about it. Dave and I have stopped exploring the hedgerows on foot as other demands have encroached on our time. Therefore, I was delighted to make an excuse to get out there with the Montgomeryshire Field Society this week.

The Montgomeryshire Field Society planned to explore Montgomery Castle and the surrounding countryside this August, as part of its Summer programme 2015. They have surveyed and reported on the flora and fauna in and around Montgomeryshire for over 60 years.

After meeting up in the very pleasant surroundings of Monty’s Brewery Visitor Centre for a picnic lunch (and having a taste of my favourite tipple, Monty’s Sunshine), we set off on a range of walking routes. The ‘birders’ took a route through Lymore park and along Offa’s Dyke (similar to this one), and some others opted to walk in and around the town. I joined the ‘long walk’ that took us past the castle, up to the county war memorial (‘the monument’) and around the fields between Montgomery and the village of Llandyssil.

A little group formed around the edge of the path leading to the monument. They weren’t looking at the brambles or the nettles or the hogweed heavy with seeds. No, they were studying the docks intensely. I have never paid all that much attention to docks before, apart from being thankful that you can usually find them near nettles, and that they do indeed soothe nettle stings. Now suddenly, they were attracting great attention and interest.

There were two species of dock in close vicinity of each other. The first was Wood Dock, Rumex sanguineus. Its latin name is far more descriptive than its English name, as ‘sanguineus’ refers to the blood red sap visible inside the stem, and sometimes in the leaf veins. A quick online search reveals that the Americans call it Bloody Dock and have cultivated varieties of it for their gardens, mainly as a foliage plant. The flowering spikes had turned an attractive red in the plants we looked at. 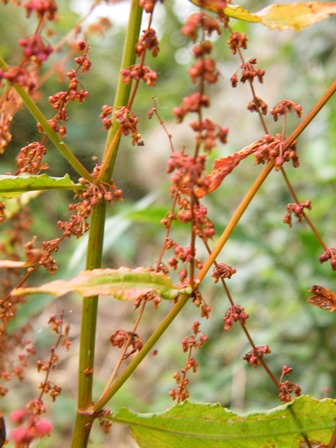 Close-up showing the beauty of the Dock flowers

I didn’t get a photo of the other dock. This one was Broad-leaved Dock Rumex obtusifolius. This one is much more feared as a weed, as it is slightly poisonous and can harm livestock. The milky sap has a reputation for causing dermatitis. The flowering spikes were much more robust and ‘chunky’ looking.

On we went, stopping to look at plants in the extensive daisy family. Hawksbeards, plume thistles, and sow thistles dominated much of the terrain. One of the plants we identified early on was the Nipplewort Lapsana communis. It is a modest plant that finds it way easily into gardens and can be quite attractive in its own way. Perhaps it gets its name from the somewhat nipple-shaped flower buds, although some sources claim it is effective at healing sore nipples!

Two other rather impressive plants, both in the daisy family, are worth a mention here. First, the Lesser Burdock Arctium minus.  This time of year when the flowers are bursting from their spiky buds, the intense pink can easily stop you in your tracks. Likewise, Wild Teasel Dipsacus fullonum takes on a special beauty as its tiny pale purple flowers create a halo around the unmistakable egg-like flower heads. 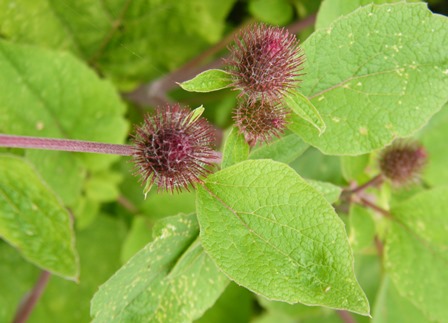 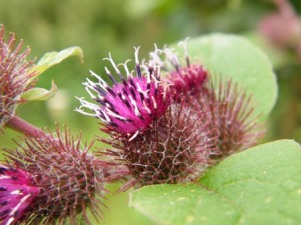 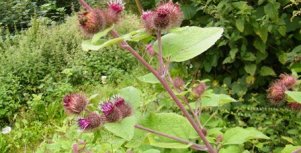 The Field Society members, who are very skilled at identifying plants and other wildlife, soon created a long list of species of interest. It was a great sunny day for butterflies. We spotted many Gatekeeper butterflies, and also Common Blue, Meadow Brown, Speckled Wood, Peacock, Painted Lady, and Comma butterflies.

If you are visiting Montgomery in August, there is plenty to observe out and about!

I enjoy writing about the intersection between people and the natural world. I also feel compelled to delve into human behaviour - philosophically and practically. With a background in further and higher education, plant science and healthcare, I like to apply my expertise in workplace learning, distance learning and e-learning. Mix it all up, and see what comes out! View all posts by Anthea

If you'd like to get on top of the health-related information you encounter day-to-day, consider my new course on Udemy: https://www.udemy.com/navigating-the-health-information-jungle/